What are some Alternative Energy Sources?

Each day, our energy needs rise, our supplies of fossil fuels run out, and the state of our planet become precarious. We increasingly need to look at alternative energy sources to meet our requirements for our modern lifestyles. Each of the methods below has been touted both a possible and an eco-friendly solution. 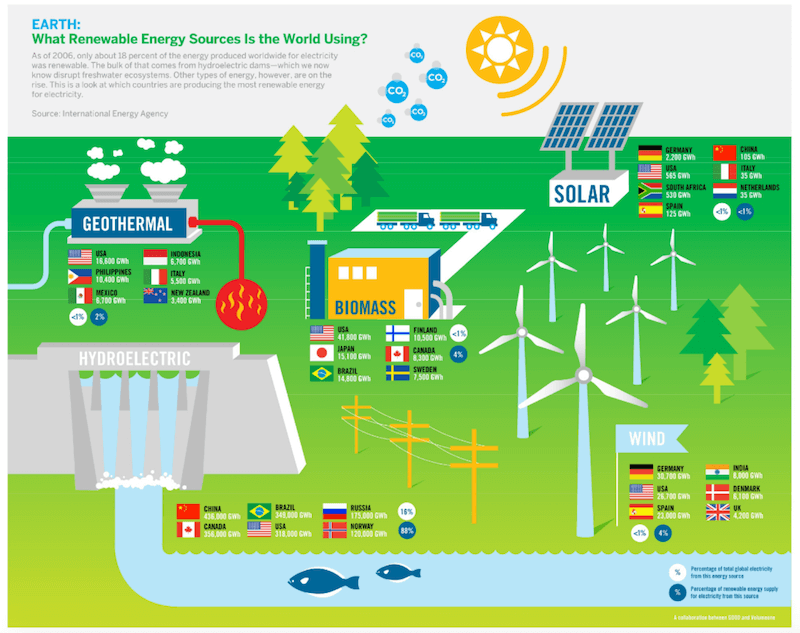 The sun, a huge burning ball of hydrogen, outputs vast amounts of energy every second. Even the minute fraction that falls on the Earth’s surface is more than enough to supply all our energy needs. In total 122 PW is incident on the surface, that is 122,000,000,000MW; a whopping ten thousand times more than our total energy requirements. The energy produced is clean and solar panels are low maintenance. They are ideal for remote locations where grid connection is difficult or expensive, and when used locally you can even overcome the energy loss of transportation.

Sounds great, but like with everything, there are problems. The highest power output can be achieved at the Equator with 1020 watts per square meter. It rapidly falls off to 125W/m2 in the north of mainland USA. Our most efficient panels can convert 15% of this energy into electricity which, if connected to the grid, must be converted from DC to AC resulting in further power loss. If you factor in the cost of panels, the current shortage of pure silicon and the unreliability of the weather solar panels start to look less attractive.

We can see the wind blowing every day, all that wasted energy just wafting away. An estimated 72TW of energy onshore is thought to be available. All you need to tap are a few wind turbines! Currently, less than 1% of the Earth’s energy needs are supplied by the wind, coming in at a mere 59GW, with Denmark being the most wind-friendly producing 23% of its energy needs. The energy produced is entirely clean and also one of the cheapest around. The conventional production is on average 18 times more energy than what is consumed in its construction. If we compare it to nuclear, it is around five times. People are often worried about the aesthetics of wind farms but what they often forget is the land can still be used for farming, with only 1% of the space being taken up by the wind turbines.

One of the biggest concerns about wind turbines, in particular with the larger 5MW models, is their effect on bats and birds. Most birds will be okay according to a study by Britains Royal Society for the Protection of Birds (RSPB), except birds of prey; in Norway, nine out of their ten sea eagles were killed by turbines. Bats are a serious problem too, even the manufacturers of wind turbines are deeply concerned by the numbers of bats being killed. Research into this is still ongoing.

Hydroelectric is an interesting case. As a renewable energy source, it is far from its infancy, with the first hydroelectric dam constructed in 1870 in England. Since then, it’s strengthened and now provides a staggering 20% of our energy needs worldwide. The biggest complex is the La Grand system of dams in Quebec producing 16GW of power. It is easy to vary output to match demand just by letting more or less water pass through, and it has proved to be a sustainable technology. Some concerns over pollution have arisen, especially in hotter climates, as plant material breaking down leads to the release of methane. The World Commission on Dams stated that at least 100W/m2 of stored water was needed if it was going to produce fewer emissions than a standard plant. In North America and Canada, this figure lies around 8%.

Although significantly better than traditional fossil fuels, it is still not the cleanest option. The flooding of riverbed drastically alters the local ecosystem both up and down stream, which has knock-on effects for the local food chain. The choice as to whether to further develop hydroelectric power around the world is a relatively easy one to make; almost all the suitable sites in the world have already been developed.

All over the globe, there are hotspots of underground thermal activity. Geothermal power plants tap into this natural heat source to provide power to homes. Iceland, for example, produces 170MW of energy and heats around 85% of their homes using geothermal power. The largest geothermal plant in the world is located 90 miles north of San Francisco and produces an effective 1GW of power!

Most of the arguments over geothermal power are concerned with whether or not it is a renewable source as eventually; areas will cool down, far quicker when being tapped for power. It could even be on the timescale of decades giving it a very short life span. The Icelandic government states that we should not consider it as renewable in the same way that hydroelectric. There are not as many sites for this as wind and solar (which can be used all over the world), and the high costs involved, it is not the most promising of the technologies listed here.

Tidal power harnesses the energy of large volumes of water moving in and out from the coast. Tides are extremely reliable and predictable which is useful for power management. Tides occur due to frictional forces with the moon (occurring due to gravity) and the energy dissipated by this 2500GW, enough to supply our current electrical needs, but not by that much with our current usage with an estimate at 2000GW. Tidal plants are very expensive and may not see returns for years due to high build costs. The largest plant currently in operation is on the Rance River producing 240MW, and it was built in the 1960s. Scotland constructed a wave power plant to replace one large fossil fuel burning station.

Energy from the sun can either be used directly using solar panels, or from resulting winds, or finally from waves. Wave power has an enormous potential to generate power, far greater than that of tidal and it can be deployed in various locations. Once constructed, they cause no pollution. The trouble is building devices that are both durable and efficient without sacrificing a product that will survive long durations at sea. The first wave farm, consisting of three generators at the Pelamis Wave Energy Converter off of the coast of Portugal generates 2.25MW. It is less than one modern wind turbine that can produce 5MW. Once again Scotland, the world leaders regarding wave energy science, are planning on the deployment of wave devices soon.

All of these technologies have some problems in common. The first is the intermittency and reliability of the sources. It isn’t always windy, the sun isn’t always shining, and waves aren’t always splashing. It causes the inherent problem of providing a constant power supply to users at home. On a country scale, we can solve this by using spinning supplies. These would be conventional fossil fuel plants running at low output, quickly being increased to full output to meet immediate demands. A more eco-friendly way of doing this is to use pumped hydroelectric. The water is stored behind a dam until peak demand, released and then pumped back again.

A much better solution is to have a distributed system over an entire continent when one country is producing too much it pumps its electricity over to someone else. When it’s not windy in Texas, it might be blowing in New York. The other problem is that everything we do at the moment is small scale. In the same way that fossil fuels were ok when we didn’t use much.

Renewable sources can cause problems upon mass deployment. Enough wind farms could change air circulation in the atmosphere and therefore weather patterns. Tidal and the wind will affect currents and local ecosystems. Too many solar panels would prevent a lot of light falling to warm the earth, possibly causing cooling (global dimming). In the past, we didn’t know the effects the mass use of fossil fuels. It is hard to predict exactly how the widespread use of renewable energy sources would affect the world around us. We must learn from our past mistakes and tread carefully into the future.

The old paradigm of power generation and distribution is changing. After years
The writing’s been on the wall for some time now – due
Solar energy is available in abundance, sustainable and it’s renewable. Each year,
Many people are unaware or unwilling to accept the fact that climate
According to the International Renewable Energy Agency, about a third of the energy
Go to Top