Since the IEA presented its World Energy Outlook report of 2012, the world’s press has spread the news that the USA can become a larger oil producer than Saudi Arabia. They have also reported on increased production of shale gas. During recent years production of shale gas has increased substantially that the price of natural gas has fallen to levels where it is no longer profitable to drill new wells. I have previously described how drilling rigs are leaving the shale gas fields. Today, the Oil&Gas Journal reported that “Oil prices rise in the mixed market but gas ‘falls off cliff.’”

Production of shale oil occurs primarily in two areas, the Bakken of Montana and North Dakota and the Eagle Ford area in Texas. Historically, some natural gas has always been produced in association with oil, and from the beginning, this has been burned (“flared off”). Nowadays, oil companies are trying to utilize this gas. It is good for the companies’ economies and is also good for the environment since burning natural gas forms carbon dioxide (although CO2 is a less potent greenhouse gas than natural gas [methane] itself).

When Norway produces oil, it follows very strict regulations controlling the associated natural gas that is produced. Oil production is not permitted to start until it has been shown how the associated natural gas will be handled. For shale oil production in the USA, a completely different set of rules apply. Now that natural gas production is not profitable they are burning it. Here is the headline of an article that I recently read in the Daily Mail, What a waste! Picture from space reveals how new U.S. oil field is burning off enough gas to power Chicago AND Washington – because it’s cheaper than selling it. ” The fact that production of shale oil is increasing without utilizing the associated natural gas has meant that the USA has become the world’s leading nation for flaring off of gas rather than using it. NASA has recently released an image that shows the light from the USA at night. Below, you can see this image and some of the associated text from Mail Online. 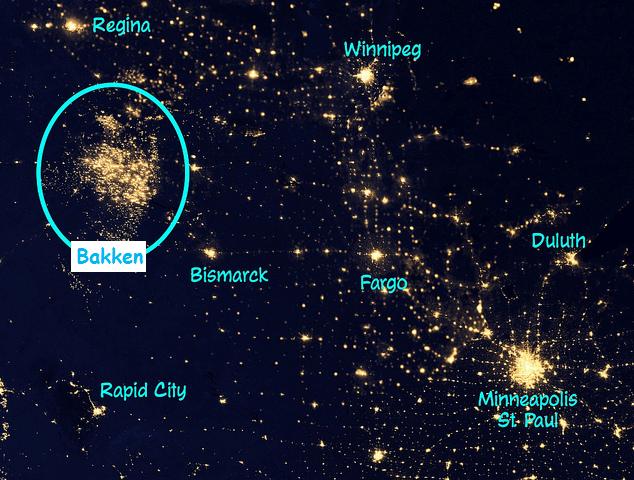 This NASA satellite image shows how the gas being burned off at the Bakken oil field in North Dakota is almost as bright as the light emitted from major U.S. cities such as Minneapolis-St Paul and Chicago

The rapid increase in shale oil production means it is now often more economical to ‘flare off’ unwanted gas than to sell it. As a result, one field in North Dakota, the state leading the energy revolution, is now burning off enough gas to power all the homes in Chicago and Washington D.C. combined.

In a recently released satellite image from NASA, the light being given off at the Bakken formation, almost twice the size of Wales, easily competes in intensity with that being emitted from those cities.

The volume of gas going up in flames at the plant rose by around 50 per cent last year alone in a practice that is causing growing concern about the waste of resources and the impact on the environment, according to the Financial Times.

The trend, which is being replicated in other shale regions such as Texas, has made the U.S. one of the world’s worst offenders for gas flaring after the amount it burns off has tripled in the last five years, according to World Bank estimates.

In North Dakota, 150 oil companies have flooded the region drilling up to eight new wells a day and are producing roughly 660,000 barrels of oil. It has reduced the country’s need for oil imports and created thousands of jobs, but the abundant supplies of gas it has unlocked have outpaced the development of infrastructure needed to store and pump it to populations. More than 1,000 wells were connected to the Bakken system in 2012, for example, but that has not been enough to cut the proportion of the state’s gas being flared.

Natural gas, called “the prince of hydrocarbons” by some, is an increasingly important fuel source in

Natural gas, called “the prince of hydrocarbons” by some, is an increasingly
Discoveries of new oil and gas reserves dropped to their lowest level
On February 6 the Swedish Energy Agency organized a symposium at which
On 20 August Wood Mackenzie (WoodMac) released a report on China and
The discussion of Israel’s oil reserves gives me a reason to discuss
Go to Top

Where does natural gas come from? Over 99% of the

Natural gas, called “the prince of hydrocarbons” by some, is