At the gas station, you might think that the prize of gas is too high. As a producer in the Middle East, you might have another opinion. In February last year Saudi Aramco, the largest oil company in the world, started to discuss production using the term Maximum Sustainable Capacity, MSC. 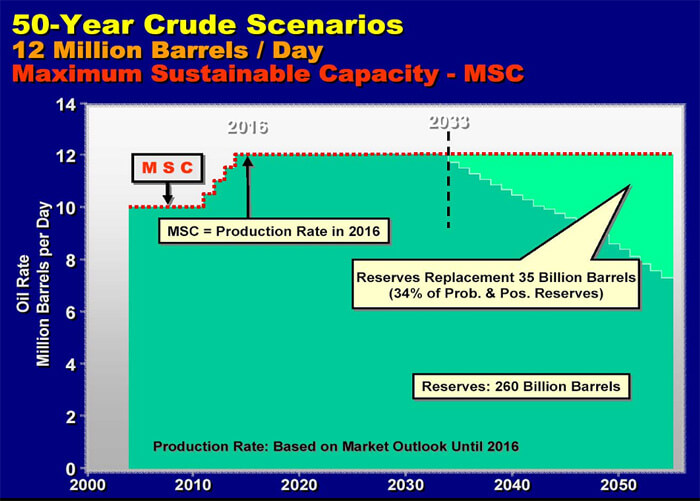 In September 2004 I was invited to Abu Dhabi and the conference The Gulf Oil and Gas Sector Potential and Constrain, and I was also allowed to visit the great oilfield Bab. 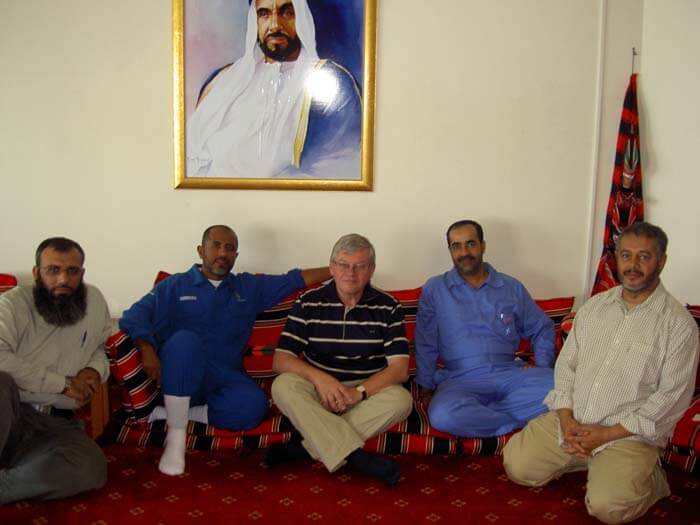 When I discussed the production with the field manager Abdulla M. Al-Malood (second from the left), he also used the term Maximum Sustainable Capacity. The production they have today can be kept for more the 20 years. In the discussion at the conference, several persons stood up and claimed that the oil-producing countries in the Middle East have to think of the coming generations. The only major source of income is from oil and gas.

With this as a background it is interesting to read the following article by Amir Taheri in Arab News:

OPEC, Oil and a Paradox

Within the next few weeks, the Organization of Petroleum Exporting Countries (OPEC) will be holding its pre-summer session to decide new production levels for the rest of the year. Already under pressure to pump an additional 1.5 million barrel into the market each day, the organization may well decide to make such a commitment in the hope of easing the current prices.

Such a move, however, could produce the opposite effect. Here is why. First, OPEC, although no longer the key player it once was in the global oil market, is still the only producer with a significant and easily tapped reserve capacity. In a sense, Saudi Arabia’s extra million or so barrels of excess capacity provides the safety wheel for the global energy market.

Once that last card is played, the supply side of the market would reach its outer limits while demand is certain to rise. Knowing that there will be no more readily available excess capacity, all major industrial nations, helped by the big oil companies not to mention speculators, will try to build up their stocks thus rising demand and pushing prices even higher. In other words, the Saudi excess capacity should always be kept as a reserve card, a kind of Damocles sword, to be shown but not to be used. Its role should be psychological, telling the speculators that they could burn their fingers while reassuring genuine consumers that they will not run out of crude.

OPEC ministers would have to ponder another paradox.

They should consider the possibility that oil is so much in demand precisely because, compared to other sources of energy, it is still too cheap. By increasing production, therefore, they would be making sure that oil remains cheap, or becomes cheaper thus in turn further boosting the demand and creating a vicious circle.

Fears that the war in Iraq and terrorist operations in other oil-exporting nations would reduce production have not been borne out. Nor has OPEC carried out its numerous threats to cut or at least stabilize production.

Nor is there evidence that the oil companies, which have been making record profits, have engaged in any hoarding operations. If anything some companies, notably Shell, have hyped the size of available reserves to boost their share prices.

There is also no evidence that a series of strikes in the oil industries of Venezuela and Nigeria last year may have had any lasting impact on price levels.

Unable to blame either OPEC or the oil giants for high prices, some professional doomsters have pointed the finger at the American consumer who is supposedly driving oil prices up by buying gas-guzzling SUVs. But the fact is that US demand for oil has risen by just over 700,000 barrels a day in the past four years, which means a relative decline, compared to its overall economic growth.

Others point the finger of blame at China that happens to be the flavor of the season as the latest economic success story. But Chinas oil consumption has risen by almost 1.5 million barrels a day since 2002.

Although this is twice higher than the increase in the American consumption, it is still not big enough to drive the price from $20 in the year 2000 to almost £60 this year.

The mystery deepens when we remember that the average growth rate in the global economy, much of its due to China and a few other Asian tigers plus the US, stands at around just five percent since 2002. And that certainly cannot warrant a tripling of crude oil prices.

But what if oil is so much in demand because it is relatively so cheap?

The suggestion may sound outlandish to the European or American driver who has to lay more for a full tank. But leaving aside the fact that the lions share in the price of petrol at the pump goes to government taxes, and not the price of crude or refining, the overall cost for the consumer is still lower than ever.

Let’s leave the Chinese consumer aside for the time being.

Today, regarding per capita disposable income, the average Western consumer is paying some 50 percent of what he was paying for oil in 1955. Even compared to the two big oil shocks of 1972 and 1981 the average consumer is paying 88% and 60% respectively of what he paid then. The reason is that the average citizen in the member countries of the Organization for Economic Cooperation and Development, that is to say, the world’s richest nations, is almost three times richer in real terms than in 1955 and half time again richer since 1981.

The Chinese case is even more interesting. The average Chinese per capita income in real terms is now almost twice what it was in 1981. Thus about his real income, the average Chinese is paying less for this oil than ever.

What all this means is that cheap oil remains as much as a factor of growth in the global economy as it did in the golden days of the last century when the first truly industrial powers emerged in Western Europe, North America, and Japan.

The persistence of cheap oil is, in a sense, in line with the tendency of the capitalist system over the long term to reduce the price of consumer goods thus enabling new classes of consumers to emerge from among the lower income categories. The capitalist system operates like a bicycle: You keep going as long as you keep pedaling. In economic terms, it means a constant quest for new consumers and markets.

The Marxist claim was that capitalism plunders the world, making more and more peoples poorer. While this may be true in the short term and for particular capitalist entrepreneurs, in the long term and the case of capitalism as a system, the opposite is true. As a system capitalism is constantly looking for new consumers with a rising purchasing power to buy more goods and services.

The paradox that the OPEC ministers will have to ponder is this: How come that oil, while the essential ingredient in the magic mix that has made so many nations wealthy, has not produced the same results for those countries that export it?

Except for Norway, which is a particular case, all the five leading exporters of oil are today poorer in real terms than they were 20 years ago.

The conclusion must be that those who buy oil get rich and those who sell it do not.

To be sure, oil exporters look, and in a sense are, rich regarding large amounts of cash at their disposal. But they do not become wealthy, in the sense that the traditional capitalist nations are. A quarter of a century ago OPEC countries represented almost five percent of the global market for goods and services in real terms; Today their share is closer to 3% and declining.