During the last two months, we now have seen two articles with alarming news about the production of crude oil from Kuwait. The first came in November by James Cordahi and Andy Critchlow at Bloomberg and was entitled: Kuwait Oil Field, World’s Second Largest, ‘Exhausted.’ A quote from the article:

The plateau in output from the Burgan field will be about 1.7 million barrels a day, rather than as much as the 2 million a day that engineers had forecast could be maintained for the rest of the field’s 30 to 40 years of life, said Farouk Al-Zanki, the chairman of state-owned Kuwait Oil Co. Kuwait will spend about $3 billion a year for the next three years to expand output and exports, three times the recent average.

To boost oil supplies, “Burgan by itself won’t be enough because we’ve exhausted that, with its production capability now much lower than what it used to be,” Al-Zanki said during an interview in his office in Ahmadi, 20 kilometers south of Kuwait City. “We tried 2 million barrels a day, we tried 1.9 million, but 1.7 million is the optimum rate for the facilities and economics.”

Reuters has just delivered a second alarming message: OPEC producer Kuwait’s oil reserves are only half those officially stated, according to internal Kuwaiti records seen by industry newsletter Petroleum Intelligence Weekly (PIW). “PIW learns from sources that Kuwait’s actual oil reserves, which are officially stated at around 99 billion barrels, or close to 10 percent of the global total, are a good deal lower, according to internal Kuwaiti records,” the weekly PIW reported on Friday. It said that according to data circulated in Kuwait Oil Co (KOC), the upstream arm of state Kuwait Petroleum Corp, Kuwait’s remaining proven and non-proven oil reserves are about 48 billion barrels. Officials from KOC were not immediately available for comment to Reuters. PIW said the official public Kuwaiti figures do not distinguish between proven, probable and possible reserves. But it said the data it had seen the show that of the current remaining 48 billion barrels of proven and non-proven reserves, only about 24 billion barrels are so far fully proven — 15 billion in its biggest oilfield Burgan.

In March 2003 I asked Jean Laherrere about his opinion about the reserves in Kuwait, and this is part of his reply from March 17, 2003.

From the incomplete scout data, the picture of Kuwait oil is as follows.

From the technical data, the cumulative discovery of oil +condensate is plotted versus the cumulative number of New Field Wildcats to give the “creaming curve” which is modeled with two hyperbolic curves with an ultimate of 100 Gb.

It shows that the undiscovered potential is small in Kuwait.

The cumulative discovery versus time is plotted with the cumulative production (adding 2 Gb in 1991 as the loss of the fire in the Gulf War), the difference gives the remaining reserves.

The remaining reserves from the technical data are compared with the political reserves given on the OPEC site since 1981 which are the data published in the Oil & Gas Journal (Kuwait + 1/2 Neutral Zone), data which is also taken as reference by the BP Statistical Review. World Oil is slightly different from OGJ.

But if political data and technical data were similar up to 1983, they completely diverge in 1984 when Kuwait decide to increase its reserves, followed later in 1990 by Saudi Arabia. But strangely the reserves of the Neutral Zone, owned half and half by Kuwait and Saudi Arabia did not increase at all its reserves as the joint owners did no agree about the timing of the increase. It is a joke to see OGJ data being the same since 1991 at 96.5 Gb as if the new discoveries were replacing the production even the loss of 2 Gb in the Gulf war in 1991.

The reported ultimate of the Greater Burgan is 59 Gb, but it ‘s hard to check the reliability of this estimate as the data are incomplete (stopping in 1998 for the annual production) and the field production was disturbed by the constraints on production because quotas, and the Gulf war, and not yet showing a reliable decline (since its peak in 1972 at 2.4 Mb/d) to indicate its real ultimate value.

Jean makes today the following comment: The cumulative production of oil and condensate at end 2004 is about 38 Gb including 2 Gb lost during the 1991 fires. IHS 2005 reports cumulative discovery at 93 Gb, when WM 2005 reports 72 Gb, giving remaining reserves of 55 or 34 Gb at end 2004. IHS is usually too high and WM a little too low so 40 Gb seems to be the average. It is interesting to see that OPEC Preserves estimate was about IHS 2P value from 1970 to 1984 and apparently, Kuwait value jumped in 1985 in the quotas fight started by Kuwait keeping the remaining value flat when no discovery and reserve growth is not justified is, of course, wrong. Kuwait seems, in fact, to return to the pre-1985 value of cumulative discovery. The creaming curve shows that there is little hope of discovery. 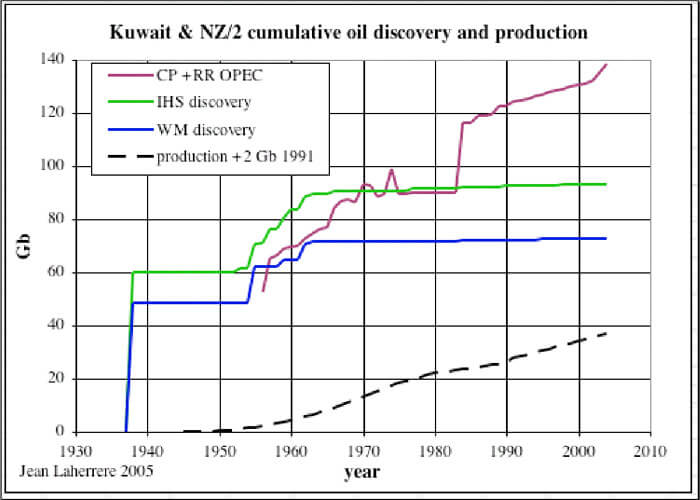