This paper by Jean Laherrere contains an enormous amount of data and forecasts of future productions and discoveries of natural gas. You can find data for the world, regions and individual countries and I think that it is hard to find something similar anywhere else in the world. It contains 112 figures, tables and other data that will be of high importance to understand the future production of natural gas in the world, Europe, North America, North Africa and the Middle East.

I like to highlight some of the findings that nations and industries should consider for future planning of the use of natural gas. For existing data Jean Laherrere makes the following remarks: – Data is unreliable for production, but it is worse for reserves. As for oil, the remaining gas reserves published by political sources [inquiries to governments done by Oil & Gas Journal (OGJ) and reproduced by BP, OPEC and World Oil (WO)] are drastically different from industrial sources. Cedigaz is also getting data from governments. American media’s report proved reserves to please the SEC, although many countries report proven + probable reserves, such as the UK. The current data is designed to provide growth, and most annual additions are revisions of past estimates.

The conclusion of this is that decisions within the natural gas industry have been taken by governments because they have been far from reality. The fact that fractions of the discoveries have been reported instead of the full amount gives misleading trends for the future.

You can see in the figure that we officially get a picture that shows a growth in reserves instead of the fact that the reserves have been more or less constant from the year 1980 because the annual discovery is close to annual production.

There is a strong message in the next figure.

The fact that the discoveries of oil peaked in the 60:s is today an accepted knowledge, but the fact that the natural gas discoveries peaked in the 70:s is for the majority a well-hidden secret. Many believe the exploration for natural gas is nonexisting, but the industry is searching, and they just find less. We are now in a face when we are consuming more than we are finding. It is at this very moment devastating for the US and it will within a future also affect Europe.

You can see that the rates in technical data that have a constant slope for both oil and gas. In general, one can say that one expect a straight line till the time for the peak production and in the case of oil should that be 2008. From the figure, you can see that the time difference between the two lines is less than 20 years. It indicates that peak gas might be a reality within 20 years after the peak oil, or around 2030. Obviously there is considerable uncertainties in this number, but it is time to start to think of a year for the gas peak.  With the enormous expansion that we now can see in Europe, it might be earlier.

Data for the world is based on regional data. The regions of particular interest are North America and Europe. In the next figure, Jean Laherrere present production and discovery data for the US, Canada, and Mexico as these countries are linked together with pipelines. The discovery rate is shifted 23 years, and by doing so, one can see that there is a sharp connection between production and discovery. In principle, it’s very easy to understand as it is not possible to produce something that not has been found. 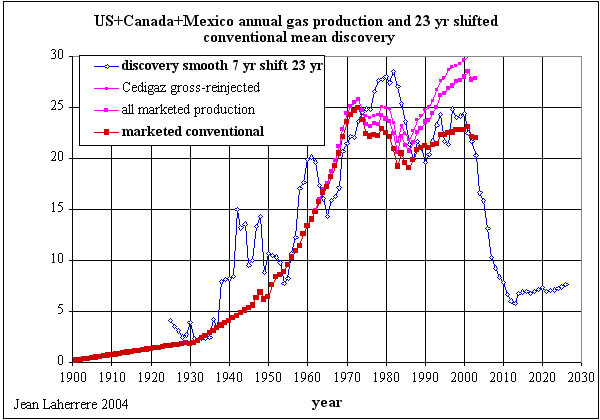 The decline rate in the discovery of natural gas twenty years ago will dramatically lower the production in the region within the next decade.

The net for natural gas is expanding in Europe, but the production within Europe is declining. The next figure is a summary of the situation. 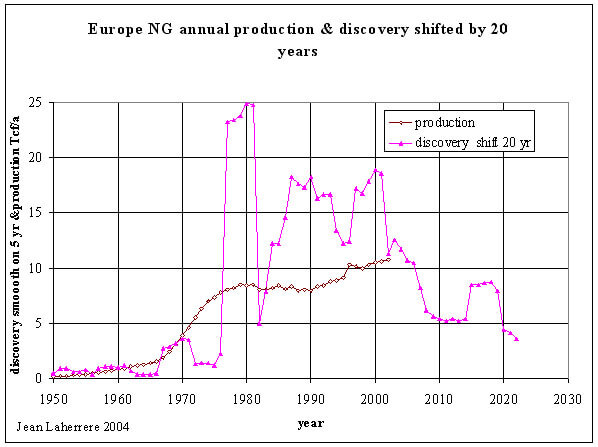 The discovery numbers are shifted 20 years. The trend for the last 40 years is that we have found less for every year and since 1990 is the discoveries far below the production. We are now very dependent on import of natural gas from Russia and in the future will the navel-string for Europe have the placenta in Russia.

Data for individual countries and much, much, more is found in the full paper.

Jean Laherrere
Member of ASPO, the Association for the study of peak oil and gas.
Contribution to the 3rd International Workshop on Oil&Gas Depletion
Berlin, Germany, 24,25 May,2004

Natural gas, called “the prince of hydrocarbons” by some, is an increasingly important fuel source in

Natural gas, called “the prince of hydrocarbons” by some, is an increasingly
Discoveries of new oil and gas reserves dropped to their lowest level
On February 6 the Swedish Energy Agency organized a symposium at which
On 20 August Wood Mackenzie (WoodMac) released a report on China and
The discussion of Israel’s oil reserves gives me a reason to discuss
Go to Top

Where does natural gas come from? Over 99% of the

Natural gas, called “the prince of hydrocarbons” by some, is